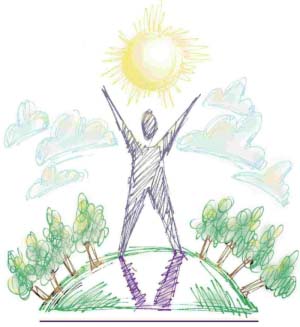 Every once in a while, often without warning, I can be struck with the beauty of things around me. One of those experiences struck me today, and caused me to think immediately of a book I heard reviewed recently. It was called “Better Never to Have Been: The Harm of Coming into Existance“. I’ve never read the book (and doubt I ever will), but apparently the book’s thesis is that it is better to have never been born, and that it would be best for humanity to extinguish itself.

That thesis runs in complete opposition to my own experience. Now, to say that hauling freight from a coastal boat to my brother’s warehouse complex is a positive experience would simply be a lie. Myself, I was warm, stressed, and my muscles ached, yet for a moment I looked off into the lush green of the forest surrounding Nain, and just thought, “How beautiful”, and for a moment I worshipped God there in the truck. It was a moment that someone like Tony Campolo would say was a moment where I was “truly alive”.

Now I think there’s a clear lesson there, one that several Christian thinkers have mentioned. Life for humans is most fulfilled, not by love or acceptance, but primarilly by worship. As Ravi Zacharias said in a recently broadcasted podcast (info about the podcast can be found here), meaning is ultimately found in the act of worship. This is seemingly an echo of what we see in the Psalms (just give this passage a think, It’s Psalm 100, ESV)

Make a joyful noise to the LORD, all the earth!

Serve the LORD with gladness!
Come into his presence with singing!

Know that the LORD, he is God! It is he who made us, and we are his; we are his people, and the sheep of his pasture.

Enter his gates with thanksgiving,
and his courts with praise!
Give thanks to him; bless his name!

For the LORD is good;
his steadfast love endures forever,
and his faithfulness to all generations.

The thing I notice most clearly about this passage is that it only has an implied audience, but that it focuses entirely on God. There is no sense in which it affirms the worshipper, or even says anything about the worshipper (save to further expand on God’s greatness), it focuses on God. The basis for the joy here is not personal affirmation or self esteem, but an overarching God-esteem, and a focus on God.

John Piper once pointed out that to ask a man in heaven if he is humble would come across as simple nonsense to the man, because he would be so enamoured of God, talking of himself would seem strange.

Each of these things points to something I believe our society has forgotten. In our elimination of God from the equation, we have raised ourselves to the level of existential foundation; the reason we exist is for ourselves. The result is that life becomes meaningless, because human life was never meant to be the basis of meaning (despite anything Ayn Rand would’ve said). And the children of such thought patterns are left believing they are better to have never been. The tragedy of it is that they believe it because they have never truly lived.

Jesus tells us to come to him that we may live and have life more abundantly. He wasn’t kidding. Our shortfall is that we’ve never quite believed Him on that one. Oh I pray that we might be convinced for more than a moment! I hope you will join me in that prayer.